by Arushi Chaturvedi
March 24, 2021Filed under:

Traditional architecture tempered by the learning, experience and evolving demands of time, have much to offer, both in terms of aesthetics and functionality. Tapping into this rich well of incredible beauty and knowledge, these 5 Kerala Homes by visionary architects respectfully bring together the old and the new, with stylized flair. 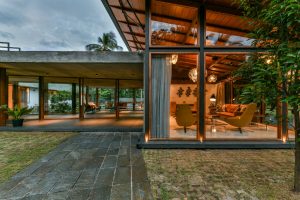 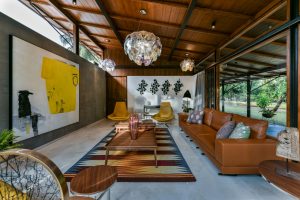 “Spread over an acre of land is the house which has a modern tropical design amalgamated with traditional architecture. The subtle slope of the traditional styled Mangalore tile roof makes the entrance verandah and inner spaces well proportioned in terms of height. The linearity in the arrangement of spaces brings in natural illumination and ventilation. Wooden, steel, and exposed concrete, open riser staircase leads upwards to the first floor. An element by itself, the staircase has a steel railing with a traditional wood carving pattern cut into it which is a subtle but impactful addition. The use of a traditional Mangalore roof tile roof along with an inner lining of plywood helps in insulating the rooms from the harsh summer heat. The material pallet has been kept very minimal with steel, wood and exposed concrete as the primary materials. Few elements such as exposed clay brick walls and natural mosaic marble flooring add value to the quality of spaces.” 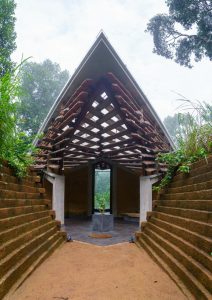 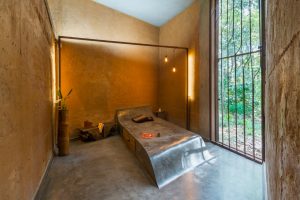 “When we first met the client, he mentioned to us about his disapproval towards certain aspects of the traditional Kerala style home system. The traditional houses in Kerala are typically sloped roof structures with heavy overhangs. Although the roof prevented rain and the cooling was phenomenal, space was deterred by the atmosphere of darkness which stayed prevalent or was associated with the ambience inside the house. The second altercation was that many of the architectural systems that were in place promoted gender inequality in the olden days since women were restricted to the courtyard. Thus during the early days of the project, the client had made a point that the house should be a symbol of a new light or a new outlook on our age-old systems and beliefs. “Chirath” which denotes a traditional lamp in Malayalam is the name given by Mr. Ramanujan Basha for his house at Pala, Kerala. The client, thus asked for a solution by throwing away the bad and utilising the good. This is the concept of Chirath.” 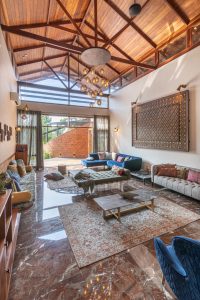 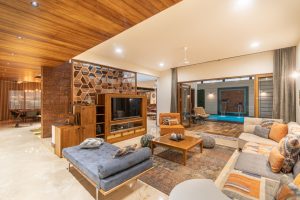 “The residence is in a densely urban part of Kochin with 17 neighbours with no redeeming views to speak of. These factors took us into an introverted process of space making with a sense of achieving privacy and disconnecting from the context. Our goal was to create a tempered fortress of sorts. One that’s layered and provided privacy. A series of light wells, courtyard volumes with the house structure the various spaces that all in some manner or the other respond to the outdoors. Elements like entry, pool, roofscapes and walls were treated as part of the landscape. Locally available materials like laterite and terracotta were used to create an architectural language that repeated both outside and within. It was an interpretation of contemporary Kerala. The narrow pathways, relentless monsoons, moss on the walls, relief of the shade and natural materials. This balance was the key to making this home exist.” 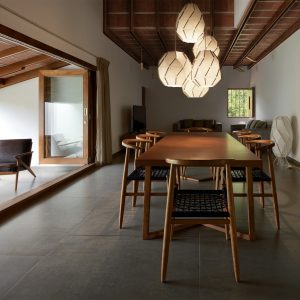 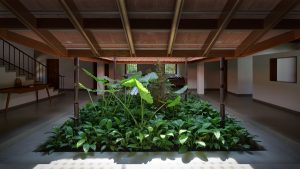 “The Jaisen House is an interpretation of the traditional courtyard houses of Kerala with its ubiquitous sloped roof form and associated character in an attempt to adhere to the context and represent it within the contemporary architectural language reflective of the times that we live in. It is a conscious study and understanding of the time tested response to the climate and cultural demands that resulted in such houses, attempting to appropriate it to the present context without losing the essential experiential qualities that they stood for. The play and control of natural light imbibe the atmospheric quality to the spaces making it more experiential than visual. The small apertures defend the interiors against the light which equates to heat in our tropical climate. One enters the house through walkway into a poomukham which is a slow transition and then abruptly opens up into the interior facing the courtyard. The house is a modernist take on the past, stripped of decor, rigorous in method but with a charm due to the subtleties followed in the treatment of each and every detail.” 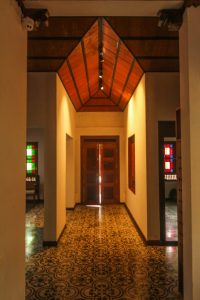 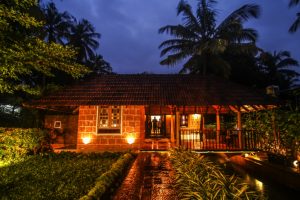 “Traditional architecture, if you can call it that way, is a lot more beyond the visual form and the story of materials it’s known for. We, say, it’s not traditional architecture, but contextual architecture, which respects the earth, environment, ecology, climate and culture. That’s how we adopted create.nurture.belong as the tag line of our practice. Architecture transcends beyond built form, and become a repository of memories, stories and inspire soulful connections with yourself, your immediate surroundings and your fellow beings. Contextual architecture is about wholesome experience, where all your senses get engaged and you feel belong to the space and the context around you. It keeps you connected to the elements of nature. It is also about being humane, working with craftsmen and local materials. Traditional architecture is not about repeating an architecture form or creating with a set of local materials, but it’s more about respecting the local wisdom and exploring the ever-evolving potentials of designing with the context & culture.”