Inspired by the 10 avatars of Lord Vishnu, Marasa Sarovar Premiere Tirupati in Andhra Pradesh is the ultimate destination for travellers. Whether you’re planning a trip to the temple town to seek the blessings of the divine or you just want to unwind, the hotel is the perfect retreat. 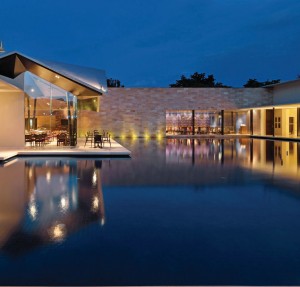 Located on the foothills of the Tirumala Hills, Marasa Sarovar is 33 minutes awa  y from the renowned Lord Venkateshwara Temple situated in the picturesque Tirumala hills. Managed by the Sarovar Hotels & Resorts and designed by Shimul Javeri Kadri of SKJ Architects, the hotel is an architectural marvel. After an exhausting journey, the warmth of the hotel staff fills you with positive energies. A traditional
welcome, complete with a tikka ceremony ensues, followed by Panakam, a customary drink which is a mixture of jaggery, dry ginger, black pepper and cardamom. As you sip on the refreshing drink, a turquoise
green stucco wall in the reception area depicting Lord Vishnu’s incarnations, catches your attention. 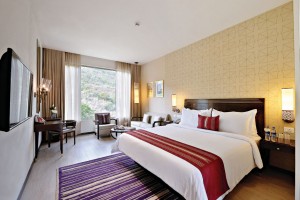 Uniquely conceptualised and designed around the Dasavatars of Lord Vishnu: Kurma (Tortoise); Ram; Krishna; Matsya (Fish); Narsimha; Varha (Boar); Vamana (Intellectual dwarf); Parshuram; Buddha and Kalki, the hotel has an air of spirituality. Each avatar has been captured in a space that has been designed with the symbols, colours and emotions evoked by the avatar. The design of the hotel embodies the classical introverted Hindu temple plan in order to optimise on land space and context.

As you walk towards the guest block, you encounter the central open courtyard with a water  body. The Lotus Cafe, which is an all day dining space appears to be floating right in the middle of the water body. Inspiration for this area was taken from the mandapa seen in the centre of the water body inside a temple complex. Another space which has influences of temple architecture with a contemporary twist is the guest block. Adorned in a black gold paint, this block stands gracefully against the backdrop of the beautiful Saptagiri hills. On one side, guests can view the scenic hills that come alive with fauna in the monsoon and on the other side is the serene view of the waterbody. Be it the food that gives you a glimpse of Andhra cuisine or the hospitality, all merge to create a flawless experience. 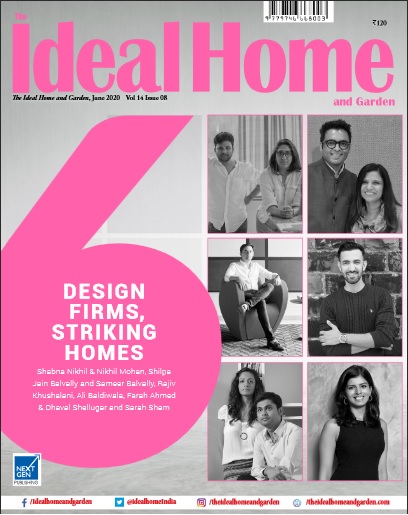