A pediatric surgeon by profession, Amrish Vaidya also trains his lens on frames that serve as an o 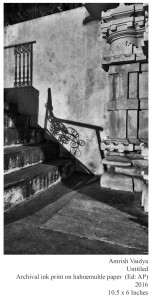 blique reminders of untold stories. His compositions often experiment with the representation of commonplace subjects, giving him a chance to explore their symbolic potential. And while his works have a sense of immediacy and resonance, they also evoke intrigue, offering possibilities of unexpected revelations.

A debut solo Frames of Reference was held at the Sakshi Gallery in 2013 and a new show entitled In The Space Between will debut at the gallery. His new exhibition revisits moments that straddle between the realms of the known and the unknown, the commonplace and the enigmatic, and the seen and the imagined.

In The Space Between will preview on 10th November and will be on view till 3rd December at Sakshi Gallery, 6/19 Grants Building, 2nd Floor, Arthur Bunder Road, Colaba, Mumbai, 400005. For more details, visit  www.sakshigallery.com.