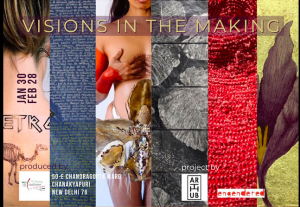 ‘Visions in the Making‘ is an altermodern art project curated by Myna Mukherjee and David Quadrio, that seeks to create a space of mutual inquiry, transformation and translation between cultures.

The formal month long exhibition features six female artists from Italy and South Asia whose works provide a framework for a new modernity that is emerging and is reconfigured to an age of hybridization. Art Hub Asia Shanghai/Hong Kong & Engendered,Transnational Arts and Human Rights, have promoted and produced this in collaboration with the Italian Embassy Cultural Centre.

All six artists Amina Ahmed, Natascia Fenoglio, Stefania Galegati Shines, Marta Roberti, Shilo Suleiman & Gopa Trivedi come together in the contact space of the exhibition to create works that defy standardisation and commercialisation, transpose information from one format to another, play with time and temporality, and wander in geography as well as history.

• Natascia Fenoglio’s works with performative gestures and objects of functional use like food, paper, ceramics etc. that elevate these to poetic works and ironic commentaries on the world of design and art. 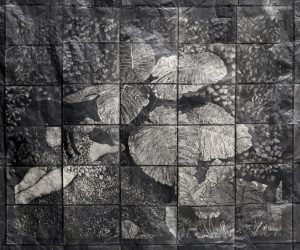 • Stefania Galegati Shines presents an articulated project entitled “Let’s buy the island of the females”. An island to be purchased by women, for women. An island symbol of resistance, both possible and true. A project to be shared literally and metaphorically. 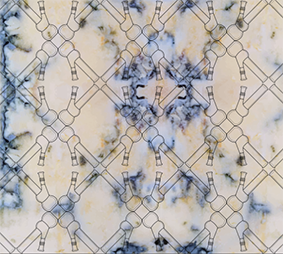 • Neo-miniaturist Gopa Trivedi creates subversive new idioms to grapple with the complex and often deep-rooted socio-political stances that pervade South Asia. She re-infuses and re-contextualizes miniature court styles but in radically different style by fusing traditional painting with minimalist abstraction, architecture, technology and new media. She works on temporality and corporality of time by using diverse materials, often creating her own dyes or sculpting with edible products like bee wax. 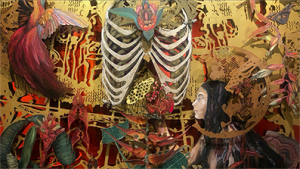 • Amina Ahmed’s work, in contrast, borrows from folk and spiritual traditions, geometry and metaphors. As a Muslim woman artist in a Diaspora that is increasingly stereotyped, polarised and put under surveillance, her work questions to what degree she can shape her own representations.

All six artist have created new works, site installations or performance for this show. And as a special feature the opening of the exhibition, 30th January at the Cultural Center, had artist Natascia Fenoglio working with the local chef at the restaurant Diva to develop a series of dishes that were then presented at an installation, as a part of the artwork that is on display in the gallery space.